Orry-Kelly is an enigmatic name. It reveals nothing about the man who held it, but it carries a hint of mystery that makes you want to know more.

As even the most casual fans of classic Hollywood can probably tell you, Kelly was a costume designer that dressed Hollywood’s biggest stars and costumed some of its most iconic movies; some of them might also be able to tell you he capped off his career with three Oscar wins out of four nominations.

Beyond that, though, they’d likely be hard pressed to tell you more. In the decades since his death, only industry insiders and people who knew him personally had much information about Kelly’s private life outside of the essential biographical details and, perhaps, a few salacious tidbits of gossip. That changed when a relative found the manuscript of his memoir in a pillowcase that had gone untouched for 50 years; titled “Women I’ve Undressed,” it was published in 2015, at long last revealing his story to the world as only he himself could tell it.

Now that story is about to hit the stage, as writer/performer Nick Hardcastle debuts his new play, simply titled “Orry,” at the Lee Strasberg Theatre in West Hollywood. It’s a theatrical distillation of the memoir in which the iconic designer returns to celebrate his own fabulous life on the occasion of his funeral, and for Hardcastle, it’s been a labor of love.

He, like Kelly, is an Australian who came to America to pursue an entertainment career; they each found success before coming to Hollywood, Kelly in New York and Hardcastle in his native country.

“The more I get to know him, the more I relate,” says Hardcastle.  “I’m from a tiny little coastal town in New South Wales, just like him, and I couldn’t wait to get out of my small town, either.”

He’s come a long way. Beginning as a host for a popular music video program in his homeland, he parlayed that into a multi-faceted career in which he’s piled up countless credits as a TV host – alongside dozens for film, TV, theatre and musical theatre acting. He’s also the co-founder of the Australian Theatre Company, which, like many of the other platforms from which he works, aims to promote cultural exchange between Australia and the US. He’s been in Los Angeles for the last seven years.

“I’d always been aware of Orry-Kelly, since I lived in Hollywood,” he says. “I don’t know that I knew who he was before I moved here, but Orry has always been mentioned as an Australian pioneer in the film industry.”

Still it wasn’t until he saw a documentary about Kelly – “Women He’s Undressed,” by another Australian, Gillian Armstrong – that he was inspired to create his own show about him.

“This seemed like the perfect story,” he gushes, “this Australian who came over to New York in the twenties, who had a Broadway career before coming to Hollywood and creating an incredible legacy. After watching the film, I was so compelled by his story that I called the publisher of the memoir the next day and asked, ‘Who has the theatrical rights to this book?’ I was fortunate enough that I was the first person to make that call.”

In developing the script, he worked closely with his director, Wayne Harrison, who was also his dramaturg. Hardcastle himself portrays Kelly – “He’s a fascinating character,” he says, “and he’s deeply flawed, which is great for me!”— with only two other performers to fill in other roles around him.

“It’s an intimate show, but it’s really quite a big show,” he stresses. “We do it all in as entertaining a way as possible. Orry was a showman, an artist and a performer – we’ve tried to incorporate music and film, and puppetry and song, all the things that speak to what his life was, so even though it is fairly intimate, hopefully it doesn’t feel small.” 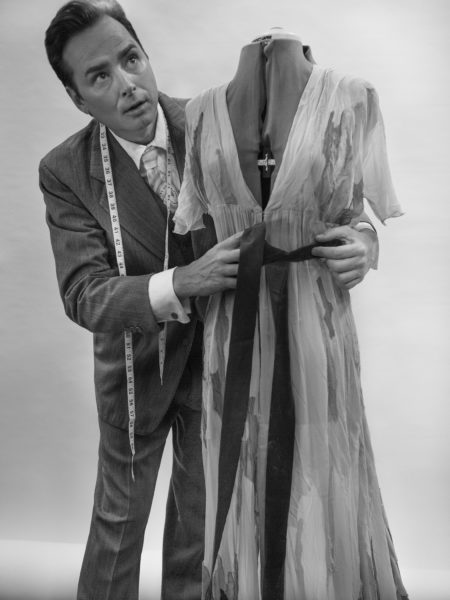 As for the story itself, one of the biggest challenges was deciding what to include. The dense memoir contains anecdotes and reminiscences from a man who had a personal and/or a working relationship with some of the biggest names in Hollywood, and audiences were sure to be interested in hearing about that – but Hardcastle opted for a different focus.

“There’s too much to cover in all that material that’s just not necessarily dramatic,” he says. “Orry lived such a full, and rich, and layered life – but when you want to see a whole life story onstage in 90 minutes, you need to find a narrative that audiences can connect to. It was really about the ‘heart connection,’ so that we really care, at the end, what he’s gone through.”

“We had to isolate some things. We thought that his identity, and love, were the things that were going to connect the audience to his story. There was one relationship in particular that was very important, someone that was in his life for a really long time. That’s the relationship that we hone in on in the show, and, of course it was with Archie Leach.”

Leach is better known, of course, by his professional name – Cary Grant – and the true nature of his long-term “friendship” with former roommate and fellow heartthrob Randolph Scott has already long been debated. Less well-known, however, is that he and Kelly, who were roommates in New York before coming to Hollywood, had an on-and-off-again love affair that lasted into the mid-thirties – at least, according to Kelly.

“He’s my source material, the memoir is what I’m drawing from, but it’s not my comment on Cary Grant, at all,” Hardcastle is quick to point out.

“Having said that,” he adds, “it’s still a comment on the system at the time – and let’s face it, that system still exists today.”

“Orry went through the twenties in New York, where it was like a sort of Babylon,” Hardcastle explains, “Then he came to Hollywood where at first it was ‘anything goes,’ and then the Hays Code comes in – suddenly everybody has gone into hiding, and the studio is in control of your life. They change your name, change your identity, marry you off and move you three doors down the street from your lover, they give you drugs to keep you up and keep you down – it was just horrific, and I don’t think Orry ever wanted to be complicit in that way of life.”

“He was not a ‘yes man.’ He was unapologetically honest, and I think that put a lot of people off.”

Kelly’s distaste for the Hollywood closet was likely inconvenient for the power players in the film industry, and Hardcastle acknowledges that might be part of the reason his private life stayed buried for so long – a wrong he’s proud to help right.

“I feel like I’m the custodian of his story, and that’s a huge privilege and responsibility, and I just can’t wait to share it with everyone.”