In 1985, Mark Patton was a 25-year-old aspiring actor about to enjoy his big break. He had been cast as the leading man in “A Nightmare on Elm Street 2: Freddy’s Revenge,” the sequel to 1984’s blockbuster slasher hit written and directed by Wes Craven. For Patton, it was a dream come true. Little did he know, his career would be over just as quickly as it began. As he puts it: “I wake up in the middle of the first movie that I’m the lead actor in, and realize that there’s a gay subtext in it.” Patton’s wild ride provides the backbone of “Scream, Queen! My Nightmare On Elm Street,” a fascinating and entertaining documentary that explores Patton’s rise to fame, subsequent disappearance from the public eye, and eventual reclamation of his queer cult figure legacy.

“Scream, Queen!” takes its double-meaning title from the classic horror trope of the scream queen or final girl, a term used to describe the last woman to survive long enough to confront the killer in a slasher film. As the first male scream queen, or “final boy,” Patton’s character Jesse was quite a radical presence onscreen at the time. Unfortunately, he paid the price for such progress. His story is a vital piece of queer film history and a necessary reminder of how far we’ve come in the fight for gay liberation.

But by far the most moving interviews in the film are with Patton himself, whose eclectic life has taken him from starring opposite Cher on Broadway under the direction of Robert Altman; to a painting studio in Puerto Vallarta; to endless horror conventions the world over. In his emotionally candid interviews, he shares life advice from Cher, sharp witticisms befitting a Hollywood queen, details of Hollywood’s pervasive homophobia and AIDS phobia, and a raw accounting of surviving the epidemic. 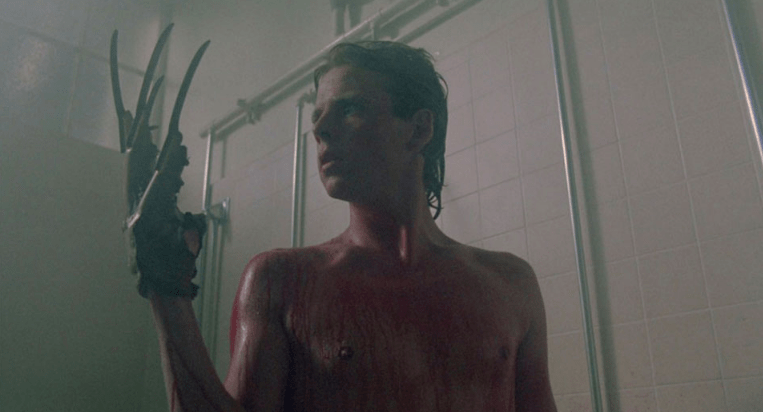 Mark Patton in “A Nightmare on Elm Street 2: Freddy’s Revenge”

In the mid-1980s, Patton contracted HIV from his then-boyfriend, “Dallas” star Timothy Patrick Murphy, who passed away shortly thereafter. Patton almost didn’t make it, but he held on long enough for the introduction of “the AIDS cocktail,” otherwise known as combination antiretroviral therapy. The fallout from “Nightmare 2” combined with the horrors of AIDS and his own diagnosis led his mental health to deteriorate. He abandoned Hollywood altogether and hightailed it to Mexico, earning him the title “the Greta Garbo of horror.” It wasn’t until years later, with the dawn of the internet, that he realized he had become retroactively famous to horror fans the world over.

“Nightmare 2” has since become a cult classic, often called the gayest horror film ever made. Horror has always used genre tropes to explore societal ills, repressed identities, and otherness. As explained in the documentary, the narrative in “Nightmare 2” can be read as “the homosexual as monster within,” symbolized by Jesse’s need to “repress his own desires in order to survive.” As Scahill puts it, the queer themes in “Nightmare 2” are so blatant from a contemporary lens that “the subtext is now text.” But Patton couldn’t see it at the time, even if some of his fellow actors did.

As “Scream, Queen!” makes clear, Patton has held a lifelong grudge against screenwriter David Chaskin for denying he intentionally wrote gay subtext into the script. Looking like James Toback’s kid brother, Chaskin oscillates between smug and glib in his talking head interviews. The film quotes an old interview where he admits the subtext was intentional, but “was intended to play homophobic rather than homoerotic.” Later, he says: “I didn’t want it to be obvious. That’s subtext. Which is why I never really admitted to it. That, and because it was so much more fun not to.”

In one of the film’s most powerful scenes, Patton finally confronts Chaskin. Driving up to the meeting, he explains that all he is seeking is an apology for and an acknowledgment of what he went through. It’s a familiar enough scene as far as these kinds of films go, but Patton is so openhearted and tender that its muted resolution feels downright revelatory.

As the camera follows his routine of attending horror conventions, waking up at the crack of dawn to sign autographs of photos taken 30 years ago, Patton asks himself — “How does Beyonce do it?” He is grateful for the income, but admits it is surreal to be trading on a career milestone that was so fraught for him. “[I] feel a little weird about that, honestly. But it is a business.” It is this candor, humor, and ability to rise from the ashes like a flaming phoenix, that make Mark Patton such a compelling and worthy documentary subject. The final boy has the final word, and it’s a vital reminder of how far we’ve come.

“Scream, Queen! My Nightmare on Elm Street” played NewFest on October 28. It is currently seeking distribution.

Sign Up: Stay on top of the latest breaking film and TV news! Sign up for our Email Newsletters here.

I’m A Celebrity 2020: Perez Hilton Reveals The Turning Point In His Career – 10 daily