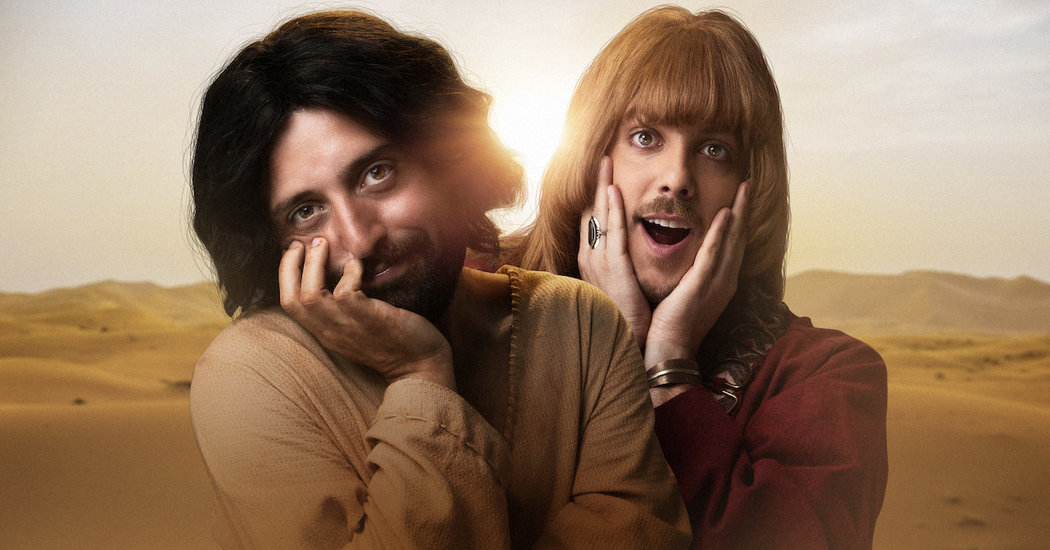 RIO DE JANEIRO — The masked assailants crept up to the building hours before dawn on Christmas Eve and lobbed a handful of Molotov cocktails.

Their target: a Rio de Janeiro-based film company that has come under criticism for producing a Netflix movie depicting Jesus Christ as a gay man.

The firebombs did little damage to the building and hurt no one. But hours later, a video posted online by three men taking credit for the attack made clear this was an effort to silence artists whose works take aim at conservatives and their worldview.

The video included footage of the act and featured a masked man who said, in a distorted voice, that the group set out to “seek justice” on behalf of “all Brazilians against the blasphemous, bourgeois and anti-patriotic attitude” of the filmmakers, who were denounced as “militant Marxists.”

The Brazilian actor Gregorio Duvivier, who plays Jesus in the film, “The First Temptation of Christ,” said Thursday that the attack set a disturbing precedent.

“We have endured all types of verbal assaults, online, even from members of Congress,” said Mr. Duvivier, who is one of the members of the production company Porta dos Fundos, or Back Door, which is known for biting satire. “But this is the first time we’ve faced violence of this nature, an attack that could have killed people.”

As President Jair Bolsonaro campaigned for his office in 2018, he warned that Brazil desperately needed sweeping cultural changes to excise an era of what he called “cultural Marxism.” The two elected presidents who preceded Mr. Bolsonaro were leftists.

Since he came to power, Mr. Bolsonaro and his allies have criticized film projects and other artistic productions that were slated to receive public funding. The government earlier this year sharply cut its funding for the National Cinema Agency, a federal organization that is the main source of financing for Brazilian films. One of the projects Mr. Bolsonaro took issue with was a film about the lives of gay black men in the capital.

That has led Brazilian artists and filmmakers to complain about an environment of hostility and censorship.

“The political discourse has been one of violence,” Mr. Duvivier said, noting that Mr. Bolsonaro at one point threatened to “gun down” his political opponents.

The group in the video called itself a Popular National Insurgence Command and used terms that harken back to a fascist movement that was active in Brazil during the 1930s.

Police officials in Rio de Janeiro confirmed the video is legitimate and are studying it and the surveillance footage that captured the attack to identify suspects. At least four men were involved, police said.

“The case is being treated as a very serious one,” Marcus Vinícius Braga, Rio de Janeiro’s Civil Police Secretary, said on Thursday, adding that intelligence and cybercrime units had taken it on in addition to local police. Mr. Braga said the incident was being investigated as an explosion and attempted murder and was not currently being considered a terrorist attack.

Since “The First Temptation of Christ” was released in early December, many conservatives in Brazil, which is home to more Catholics than any other country in the world and to a fast-growing conservative evangelical population, have responded with outrage.

In the film, Jesus comes home for his 30th birthday with a flamboyant male partner. It is a sequel to “The Last Hangover,” a parody released last year that portrayed the Last Supper as a drunken affair.

A petition to have Netflix drop the film has gathered roughly two million signatures.

Among those who have rebuked Netflix over the film was Eduardo Bolsonaro, a federal lawmaker and one of the president’s sons.

“We’re in favor of freedom of expression, but is it worth it to attack the faith of 86 percent of the population?” he wrote on Twitter. “I leave you with that reflection.”

Killer Inside: The Mind of Aaron Hernandez Doesn’t Have the Answers – Vulture

The 100 Best Lesbian, Bisexual and Queer Sci-Fi and Fantasy Shows of All Time – Autostraddle