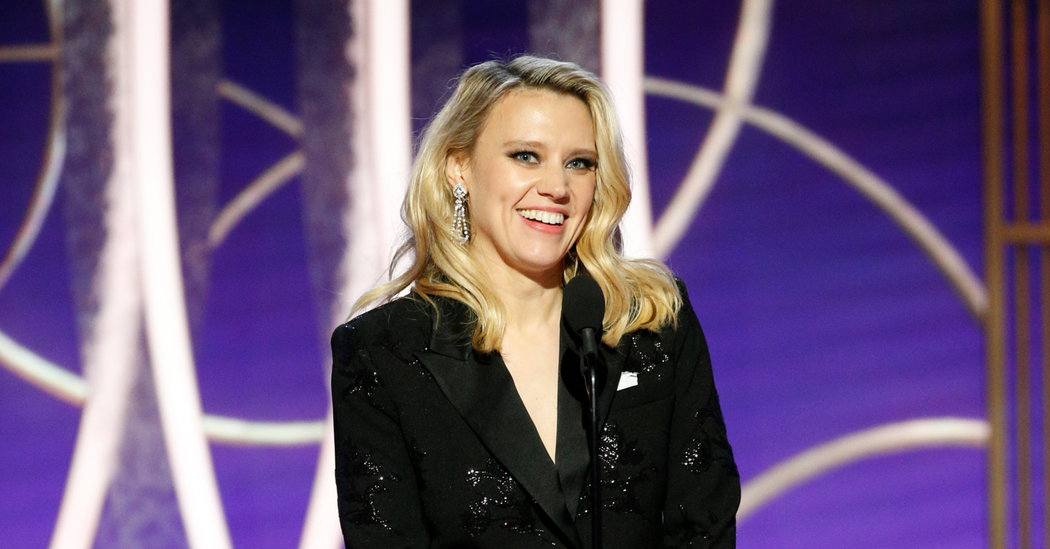 Kate McKinnon was not in the closet. She’s been open about being a lesbian for years. She joked about it with Jerry Seinfeld on “Comedians in Cars Getting Coffee” and played lesbian characters with tongue-in-cheek authenticity in skits on “Saturday Night Live.”

Even so, her sexual orientation hasn’t been talked about as much as that of some other famous actresses, particularly Ellen DeGeneres, whom McKinnon presented the Carol Burnett Award to on Sunday night at the Golden Globes. The award is a lifetime achievement accolade for her contributions to television.

In her speech, McKinnon, seemingly holding back tears, spoke candidly and with humor about being gay and the role DeGeneres played in her understanding of herself, and what it means for L.G.B.T.Q. people to see themselves represented onscreen.

Here’s McKinnon’s speech in its entirety.

The Carol Burnett Award is given to someone who like its namesake, Carol Burnett, has given us decades of laughter, tears and a new sense of what’s possible. So I would like to read a list of things that tonight’s recipient, Ellen DeGeneres, has personally given me. And some of these are spiritual and some of them are pieces of clothing I got to keep after doing impressions of her on her talk show: a road map for a way to be funny that is grounded in an expression of joy; two pairs of Stan Smith sneakers (that’s one of the clothes ones); a desire to bring everyone together by laughing about the things we have in common; my best collared shirts; a sense of self.

I have to explain that one more: In 1997, when Ellen’s sitcom was in the height of its popularity, I was in my mother’s basement lifting weights in front of the mirror and thinking, “Am I gay?” And I was, and I still am. But that’s a very scary thing to suddenly know about yourself. It’s sort of like doing 23andMe, and discovering that you have alien DNA. And the only thing that made it less scary was seeing Ellen on TV.

She risked her entire life and her entire career in order to tell the truth, and she suffered greatly for it. Of course, attitudes change, but only because brave people like Ellen jump into the fire to make them change. And if I hadn’t seen her on TV, I would have thought, “I could never be on TV. They don’t let L.G.B.T. people on TV.” And more than that, I would have gone on thinking that I was an alien and that I maybe didn’t even have a right to be here. So thank you, Ellen, for giving me a shot. A shot at a good life, and thank you also for the sweater with a picture of the baby goat on it.